GDP forecasts cut across board

Recession set to continue into 2017 as uncertainty over international interest rates, China and investment contribute to tepid predictions. Just as expectations that the economy would start to sprout green shoots by the end of the year fell flat, prospects of a strengthening, vibrant economy going into 2017 also seem to be dimming as investment banks and international financial organisations cut their original estimates for growth.

Although the Let’s Change administration predicts that gross domestic product (GDP) will increase by 3.7 percent in 2017, investment bank Credit Suisse has cut its growth forecasts down to 2.9 percent. It’s not the only one that’s doing so — the United Nations’ Economic Commission for Latin America and the Caribbean (ECLAC) has decreased its prediction to a marginally lower 2.7 percent, while the Institute of International Finance (IIF) slashed a full percentage point, envisaging 1.8 percent GDP growth overall.

“We’re predicting 2.1 percent, because of drops in the market, the impact of the appreciating dollar and increasing interest rates for financing — this will all affect growth,” Ramiro Castiñeira, a financial analyst for Econométrica, told the Herald.

Changes in the global political landscape — such as the election of Donald Trump as US president — have ended up having an impact on emerging markets, analysts say, especially after the Federal Reserve announced that they plan to accelerate interest rate increases in 2017, with three major hikes planned for next year instead of the two previously trailed. The strengthening dollar, the deceleration in China, accompanied by a lack of interest from international investors does not bode well for Argentina’s immediate future, warned Castiñeira.

The latest numbers from the INDEC statistics bureau back up this analysis. In the third quarter, industrial employment fell by 2.6 percent, while the numbers of hours worked by employees also decreased by 3.9 percent, said the bureau. Meanwhile, the amount a family needs to purchase a basic basket of goods in Buenos Aires City has tripled to 13,459 pesos per month.

When the Let’s Change administration took power last year, it implemented a series of economic and financial reforms that flexibilised capital controls, cut export duties on key agriculture and mining products, and introduced a whitewash programme aimed at increasing tax revenue and bringing cash back into the country.

“The economic policies implemented haven’t taken effect, and the expected rebound ended up producing a fall in the economy … while the international context of the increasing interest rates doesn’t help,” Andrés Asiain, an economist from the Centre of Economic and Social Studies of Scalabrini Ortíz (CESO), told the Herald.

Purchases in supermarkets and shopping malls were registered at between 13 and 23 percentage points below inflation from January until October, says INDEC. This means that while supermarket sales increased by 27 percent, to 231 billion pesos, and by 23.2 percent in shopping malls, reaching 41.2 billion pesos, both of those figures were still way below estimates of inflation, seen at around 40 percent for the year.

The warning signs are there. In a report released by Credit Suisse last week, the firm concluded that investors are now less confident that “the economic sacrifices made in 2016 would lead to growth and success … since the recession had become larger and was lasting longer than they had forecast, reducing the growth perspectives for 2017.”

Many analysts and organisations, however, remain confident that Argentina is on the right path. Despite decreasing its expectations, ECLAC predicts that foreign demand will recover in the region for 2017 and push the economy forward, allowing for an increase of trade between Argentina and Brazil. The organisation has also noted that those countries that are more integrated commercially with the United States will benefit from a recovery in demand, though at the same time warning that those countries may be affected by revisions in trade accords by US President Donald Trump.

The Let’s Change administration was boosted this week, for example, by a ruling from the US Department of Agriculture that allows Argentina to resume lemon exports to the United States, after a 15-year absence.

Despite his pessimism over the immediate future, Castiñeira believes the process of change should be seen as a long-term change.

“We need to continue working. This was only six months of adjustment, in which the government sought to liberate the economy after so many financial restrictions … this will take at least two to four years for Argentina to recompose itself, to commercially integrate itself to the world like other economies in Latin America,‘ said Castiñeira.

He highlighted how Argentina — in contrast to other countries, such as Colombia, Peru and Chile — hadn’t taken advantage of the commodities boom in order to create a rainy-day fund of reserves, leading it to have less of a cushion for adverse times like the above.

Total foreign debt spiked up to US$188 billion dollars in September, seven percent higher than in the same period last year, according to INDEC. The public sector, meanwhile, issued an additional US$47-billion worth of bonds (eight percent of total GDP), causing public debt to jump to 51 percent from 44 percent before the last major devaluation carried out by the government last January, according to a report released by Brazilian banks Itaú and Bradesco.

“The national government’s strategy is understandable. Finance the transition of an economy whose public sector doubled over the previous period … in order to use the window of low interest rates to explore private-public partnerships to invest in infrastructure,” Harvard economist Carmen Reinhart said in an interview with theClarín newspaper recently.

The Finance Ministry has said that US$58 billions of investment via private and private-public partnerships is scheduled to arrive between 2016 and 2019. In the last 12 months, less than US$4 billion arrived.

While Reinhart praised the policies being used to promote investment, she warned that there was a risk in taking on too much debt.

“It’s not sustainable to get into debt with dollars, paying 10-percent interest rates while you’re predicting two to three-percent growth forward. One must be careful over the appetite for debt with high interest rates,” said the Harvard economist, who called on the government to be fiscally disciplined.

But not only are investment banks and financial analysts more pessimistic about the opportunities for growth next year — Argentine citizens are too.

CECREDA economist Diego Cúneo explained to the Herald that expectations for 2017 are divided amongst socio-economic lines. Sixty percent of those who are in an “excellent” economic situation think the economy will improve next year, while only 46 percent of those in a “good” position believe it will be better.

One interesting nugget from the survey was the fact that over 50 percent of those surveyed said they were saving in dollars.

“The people perceive a lot of inflation, and that it is generally not good for the macroeconomic situation, making people save more in greenbacks,” he said.

According to the Revelation of Market Expectations (Relevamiento de Expectativas de Mercado) survey of 58 Central Bank analysts published last week, consumer prices will increase by 20.3 percent in 2017. On the other hand, the Central Bank expects to lower inflation for next year to 12 – 17 percent. 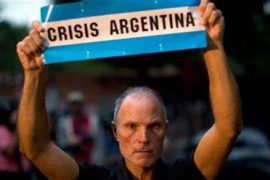